Egypt Top Attractions – Top 10 SIghts You Must Visit in Egypt

Let’s take a look at the top 10 attractions in Egypt that every visitor to the country should see. Of course, there are far more than 10 fantastic sights in Egypt, but this list will at least give you a good starting point. This is especially true if you are going to be visiting Egypt for the first time. 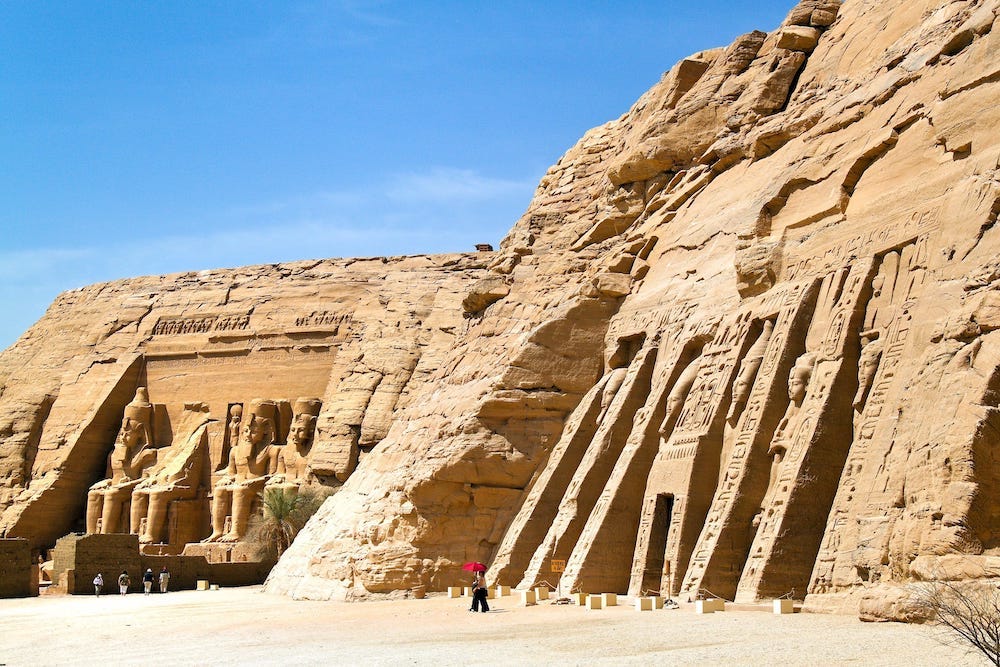 Our choice of attractions for this top 10 list is based on their overall popularity, and on feedback which we have received from our own clients over the years. Which one is your favorite?

Nearly all of these attractions are featured in the majority of our Egypt and Jordan tour packages.

Okay, let us get started with the top 10 Egypt tourist attractions: 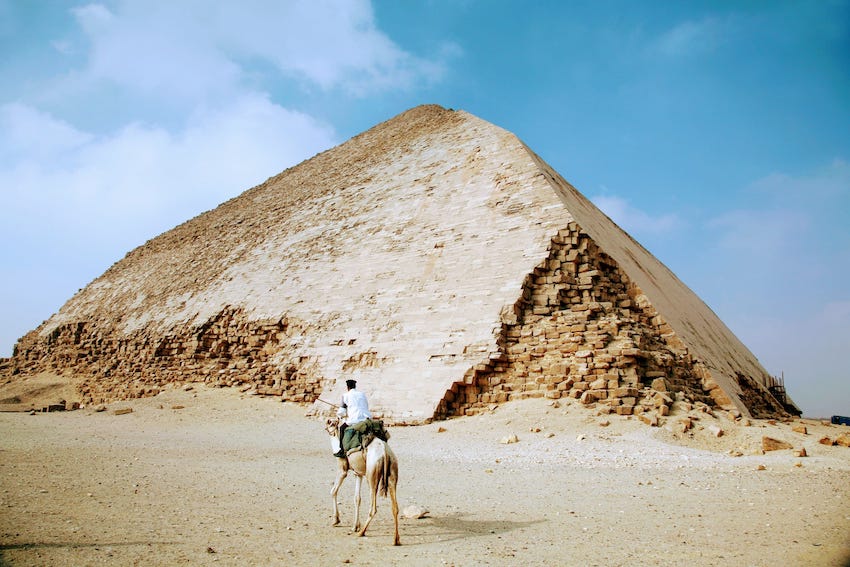 Built under the Old Kingdom Pharaoh Sneferu (c. 2600 BC), the Bent Pyramid at Dahshur is a unique example of early pyramid development in Egypt, this was the second pyramid built by Sneferu.

Dahshur is an ancient royal burial ground located approximately 40 km from Cairo, in the desert on the west bank of the Nile. The site is best known for its varied collection of pyramids, including the Red Pyramid, the Black Pyramid; the White Pyramid, and the Bent Pyramid. The pyramids at this necropolis represent a period when pyramid design was transitioning from stepped pyramids to smooth-sided pyramids.

Two of the pyramids at the site are among the biggest, oldest and most well-preserved pyramids in all of Egypt. Apart from the pyramids, numerous undisturbed female tombs were also discovered nearby. 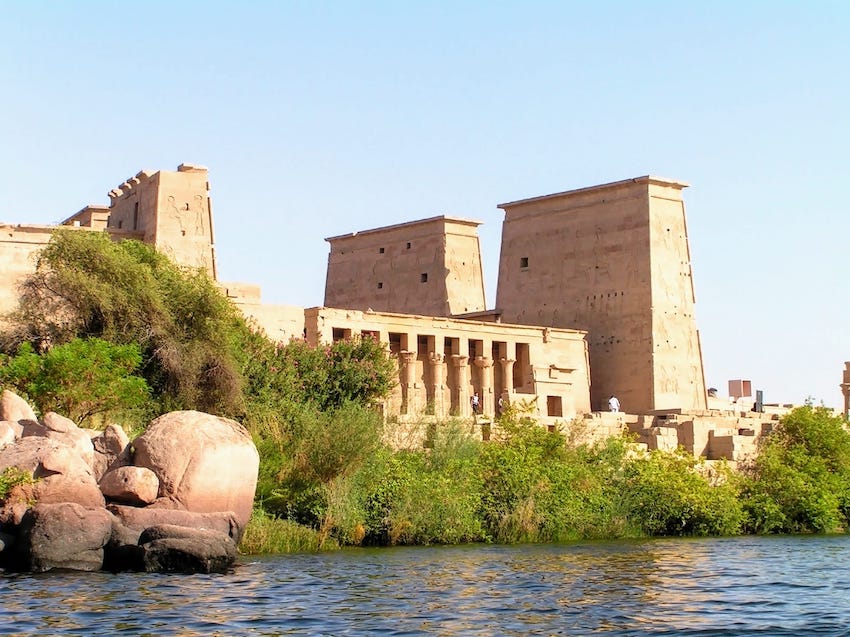 Isis was a major goddess in ancient Egyptian religion whose worship spread throughout the Greco-Roman world. Isis was first mentioned in the Old Kingdom (c. 2686 – c. 2181 BCE) as one of the main characters of the Osiris myth

Philae Temple is named after the small island on which it once stood. Both the Egyptians and the Nubians revered the island because it was believed that Osiris, the god of fertility was buried there. The temple itself was dedicated to two goddesses: Isis and Hathor. The island was so sacred that only priests were allowed to live on it.

When the Aswan High Dam was being built, it was decided that the temple would be moved to higher ground. If it had not been moved, it would have been forever lost when Lake Nasser formed after completion of the Aswan High Dam. Not only is it one of the top attractions in Egypt, but it is also the very best ancient attraction in or around Aswan. 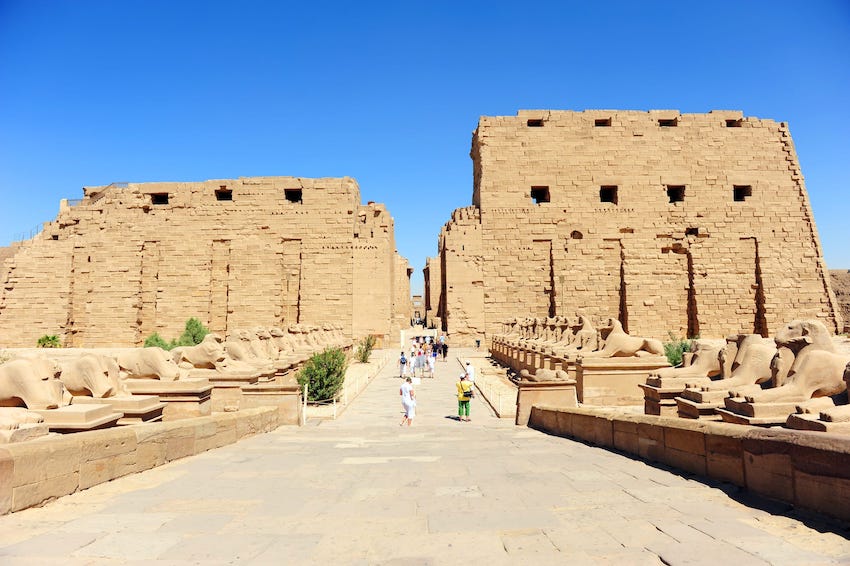 Construction at the Karnak Temple Complex began during the reign of Senusret I in the Middle Kingdom (around 2000–1700 BCE) and continued into the Ptolemaic Kingdom (305–30 BCE), although most of the extant buildings date from the New Kingdom.

Although the site is commonly referred to as Karnak Temple, it was more like a small city. In fact, the name “Karnak” comes from the Arabic name “Khurnak” which means Fortified Village. Construction began in 2000 BC and continued until about 300 BC. The site consisted of a collection of temples, chapels, pylons, and various other buildings.

Unfortunately, the complex suffered severe damage and neglect over the years, and today it is mostly just the broken ruins that remain. Still, there is just so much to see at the site, and enough to make some people visit the site multiple times. 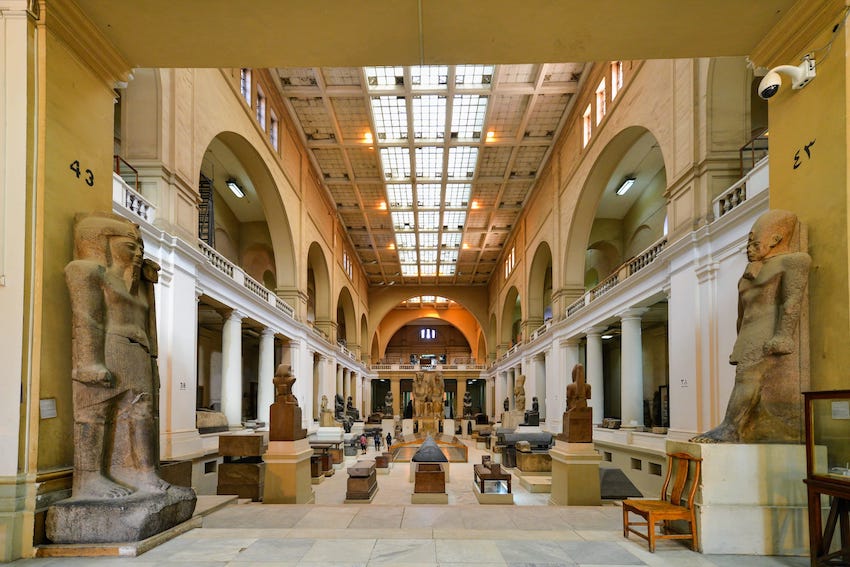 The Museum of Egyptian Antiquities, known commonly as the Egyptian Museum or the Cairo Museum, in Cairo, is home to an extensive collection of ancient Egyptian antiquities. It has 120,000 items, with a representative amount on display and the remainder in storerooms.

The Egyptian Museum in Cairo is right up there with all the other top attractions in Egypt. Located right in the heart of the city, the museum typically has more than 120,000 Ancient Egyptian artifacts on display at any given time. However, this display may diminish drastically once the all-new Grand Egyptian Museum opens near the pyramids at Giza.

In addition to all the regular artifacts, the museum also has a Treasures Room showcasing all the artifacts and treasures that were found inside King Tutankhamen’s tomb. There is also a special Mummies Room at the museum. Visitors can view real mummies that are kept in specially designed displays. Considering that the museum has the world’s largest collection of Ancient Egyptian relics, it is a place every visitor to Cairo should visit.

6. Valley of the Kings and Its 62 Ancient Tombs 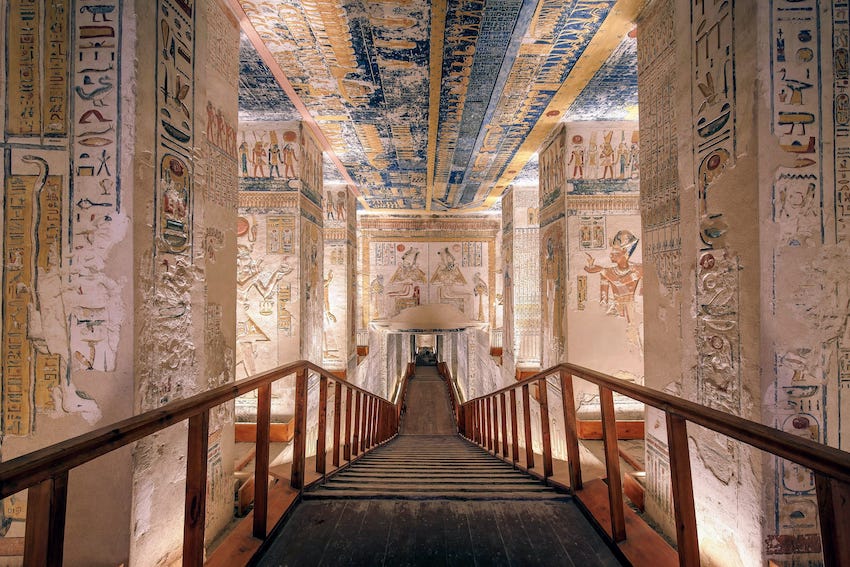 Inside tomb of Ramses VI in Valley of the Kings. Also known under his princely name of Amenherkhepshef, he was the fifth ruler of the Twentieth Dynasty of Egypt. He reigned for about eight years in the mid-to-late 12th century BC.

Valley of the Kings is also one of the top attractions in Egypt. It is an ancient royal burial ground located on the West Bank at Luxor. This is where pharaohs and other royalty were buried during the New Kingdom years. A total of 64 tombs were excavated here between the 16th century and the 11th century.

Those tombs that were not made for pharaohs were instead made for powerful nobles and other people of great influence. The simplest tomb here (KV54) is little more than a burial pit. By contrast, the largest tomb (KV5) has more than 120 chambers. Many powerful pharaohs were buried here, but it is the tomb of King Tutankhamen that is most famous. 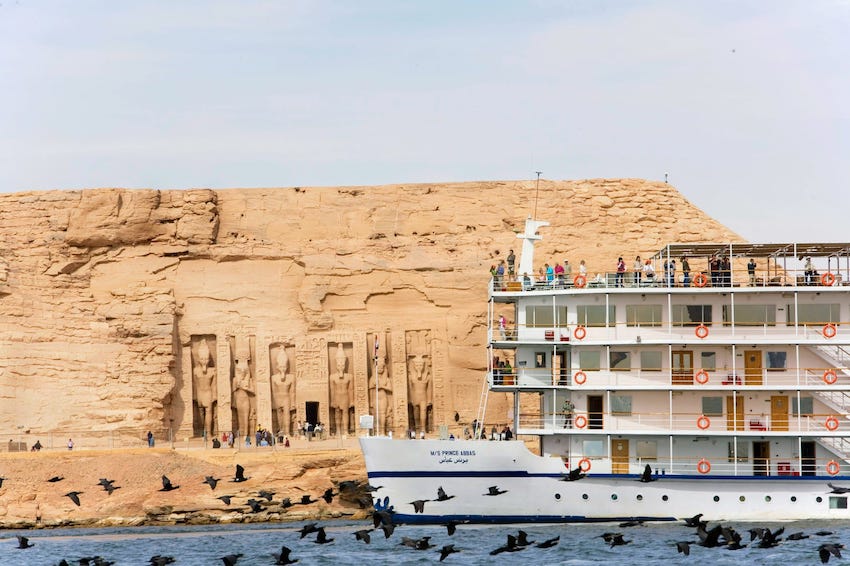 Nile River cruising is the best way to experience Ancient Egypt. Not only do you get to enjoy a wonderfully relaxing cruise, but you also get to see some amazing ancient sites along the way.

It is often said that there is no better way to experience Ancient Egypt than to do it with a Nile River cruise. Many people would even argue that Nile cruises are the very best tourist attraction in Egypt. Not only do you get to enjoy a wonderfully relaxing cruise, but you also get to see some amazing ancient sites along the way.

All of the Nile cruises that are featured in our Egypt and Jordan tours are 5-Star cruises. With full board and professional Egyptologist-guided tours, Nile cruises are a smart choice. They are often also more affordable that staying in hotels, paying for all your meals, and booking tours to individual sites.

Most of our Nile cruises run between Aswan and Luxor, but we also offer cruises to and from Cairo for those travelers who want to spend more time on the water. And, if you want to avoid the crowds that are often present on the larger cruise ships, then a Dahabiya Nile cruise will be like a dream come true. No matter which one of our cruises you book, you can be sure that you will be visiting some of Egypt’s most cherish ancient monuments. 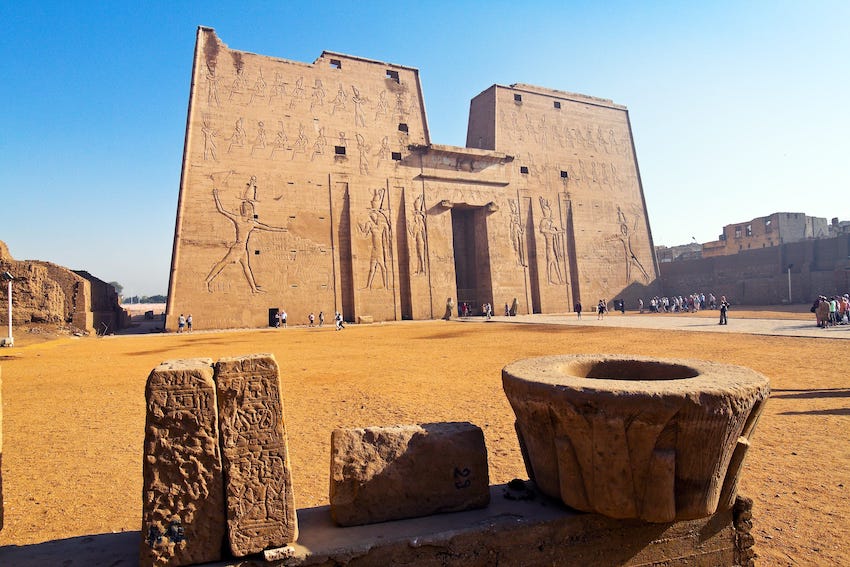 The Edfu Temple was built in the Ptolemaic Kingdom between 237 and 57 BC. The inscriptions on its walls provide important information on language, myth and religion during the Hellenistic period in Egypt.

Edfu Temple is located on the banks of the Nile River, close to the town of Edfu. It features prominently in many Nile cruise itineraries. Also known as the Temple of Horus, it has long been one of the top attractions it Egypt. It is also the most well-preserved ancient cult temple ever discovered in the country.

The Romans took possession of the temple in antiquity, only to abandon it a short while later. Their reasons for abandoning it are not quite clear. After it was abandoned, it was left deserted, and slowly but surely it was claimed but the desert sand. It was only when part of it became exposed more than 2,000 years later that it was rediscovered.

Its remarkable level of preservation is thanks to the fact that it was buried for so long. If you book one of our Egypt and Jordan tours that include a Nile River cruise, you can count on visiting this temple during your cruise. 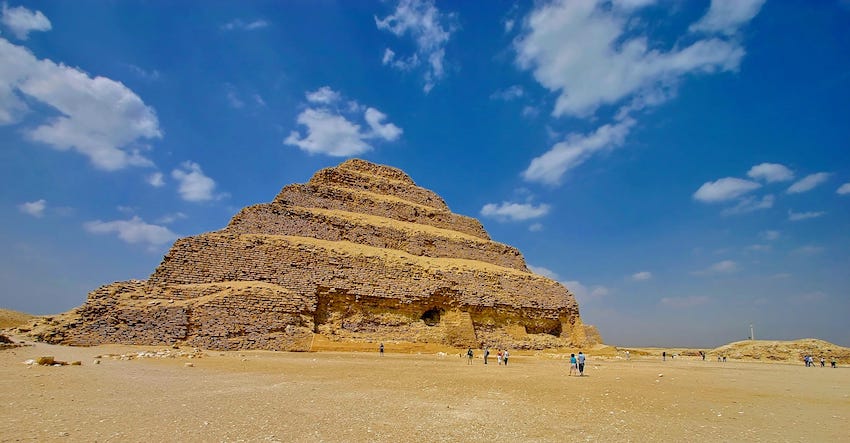 The Saqqara Necropolis is located a short drive away Cairo, near to Memphis which was the capital of Egypt during the Old Kingdom period. Like the necropolis at Giza, this was also a royal burial ground. The necropolis has always been considered one of the top attractions in Egypt. This is because it is home to the very first pyramid ever built by the Ancient Egyptians: the Step Pyramid of Pharaoh Djozer.

By the time Pharaoh Khufu had the Great Pyramid built at Giza, the Step Pyramid of Pharaoh Djozer was already ancient. Due to its vulnerable condition, the pyramid was closed to visitors in about 2005 for restoration purposes. This project which lasted for about 14 years has now been completed and the pyramid was reopened to visitors in March 2020. 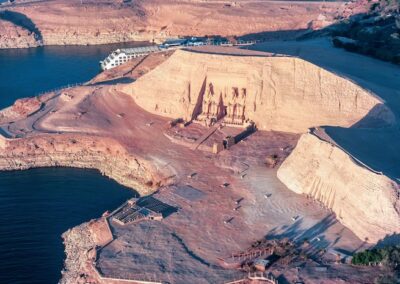 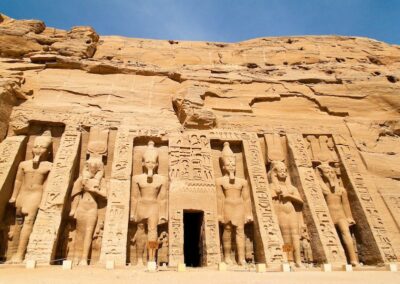 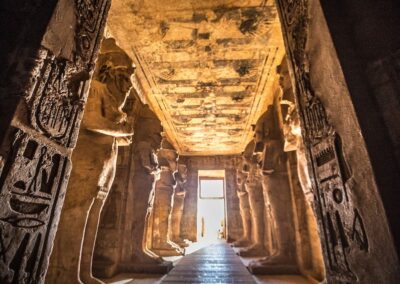 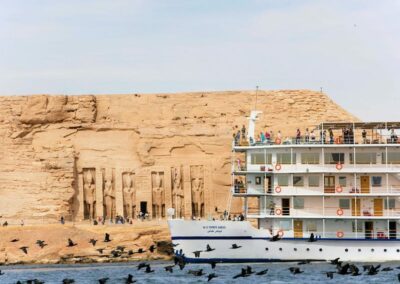 You will see the Abu Simbel temples featured on every list of top attractions in Egypt. Some visitors even consider this site to be the very best historical attraction in Egypt. Both temples were carved out of a rock face during the reign of Pharaoh Ramses II, also known King Ramses the Great. The larger of the two temples was made for him, while the slightly smaller one was made for his wife, Queen Nefertari.

The temples were dedicated to multiple gods, including Ramses who had elevated himself to a god-like status. They were also intended to portray the pharaoh’s power and wealth, and to serve as lasting monuments to Ramses and his wife.

The two temples are simply magnificent, and it is a site which ever visitor to Egypt should try to visit during their stay in the country. As impossible as it might seem, both of the massive rock-cut temples were relocated from lower ground. If they had not been moved, they would have vanished beneath the surface of Lake Nasser when the Aswan High Dam was being built.

#1. Giza Plateau – Home to the Iconic Pyramids and Sphinx 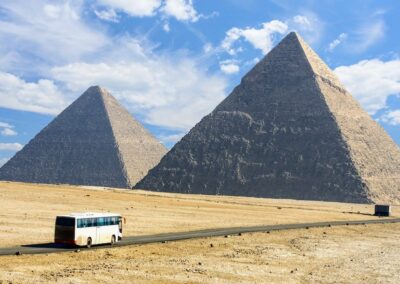 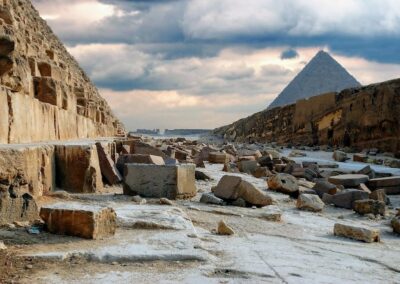 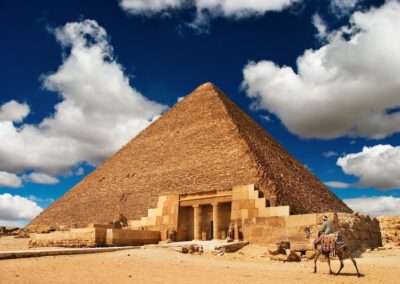 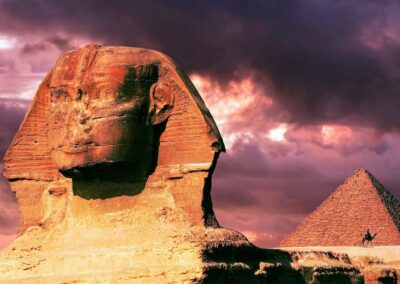 The three pyramids and the sphinx which feature so prominently on postcards are located at an ancient royal necropolis on the Giza Plateau. The site is only a short drive from Cairo itself and it is one of the first sites people visit when traveling to Egypt. The main attractions at the site are the three pyramids, the Great Sphinx, and the Valley Temple.

The largest of the three pyramids is known as the Great Pyramid. It was built to serve as the final resting place of Pharaoh Khufu. At approximately 139 meters in height, it is the largest pyramid ever built by the Ancient Egyptians. The face of the Great Sphinx is widely believed to be a depiction of Khufu.

Alongside his pyramid, is the pyramid of Pharaoh Khafre. Khafre was Khufu’s second-reigning son. His pyramid is somewhat smaller but it is still the second-biggest pyramid built by the Ancient Egyptians. The smallest of the three pyramids belonged to Pharaoh Menkaure.

It is usually possible for visitors to enter at least one of the pyramids during their visit. There is also a small museum at the site called to Solar Boat Museum. The museum houses a reconstructed version of a type of boat the pharaohs used for traveling on the Nile. Most of our Egypt and Jordan tours do not include a ticket for the museum or for entering a pyramid.

Many people who venture into one of the pyramids describe the interiors as being uncomfortably warm and somewhat unpleasant. Admission tickets can be purchased at the site, so we leave it up to our clients to decide if they want to go inside a pyramid during their visit.

Visit, explore and enjoy all the top attractions in Egypt in comfort and style with more than 65 years of experience right by your side. Contact us today and let us turn your dream vacation into reality.

Come Explore the Best of Egypt and Jordan