Enjoy a premium quality 5-day Jordan Petra Tour Package that brings out the timeless magic of this fascinating country in flawless style. Marvel at the rock-cut Rose Red City of Petra; stroll among the ruins of an ancient Roman city and go floating on the Dead Sea. Visit the mosaic town of Madaba; Ajloun Fortress; Mount Nebo, and more.

With private air-conditioned transport, excellent accommodation, and professional guides, our Petra Jordan tour packages are so much more than just sightseeing tours. 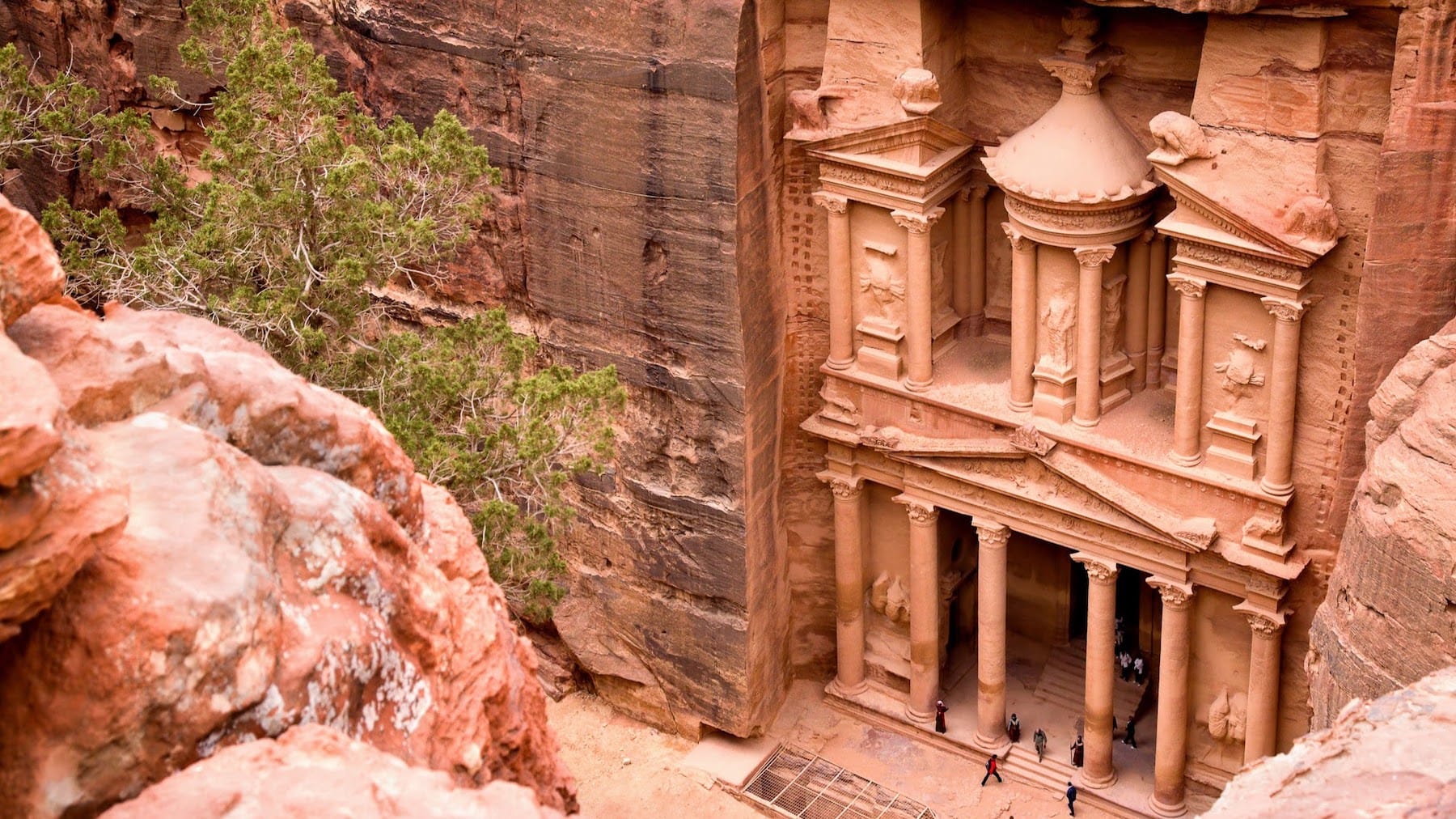 DAY 1 – Arrive in Amman for your Jordan Petra Tour Package

One of our tour representatives meet you at the airport when you arrive in Amman and then you are transferred to your hotel in a private air-conditioned vehicle. He will get you checked-in at the hotel and he will confirm a pick-up time for the following day’s tour. After this, you are left to enjoy the remainder of the day as you wish.

After breakfast, you are picked up from your hotel, and then you drive to Madaba where you visit the Greek Orthodox Church of St. George. The church is famous for its 4th-century mosaic map of the Holy Land.

When you are finished at the church, you then head to Mount Nebo. According to the Bible, Moses was on the mount when God appeared and showed him the Promised Land. Some people also believe that Moses was buried on Mount Nebo. You will also visit an old monastery, and then you will drive to the Dead Sea.

The Dead Sea is the lowest place on earth and is famous for its extremely salty water. We’ve all seen pictures of people floating on the Dead Sea, and now you will have the chance to experience this for yourself.

After spending a relaxing afternoon at the Dead Sea, you then drive back to Amman and you are dropped off at your hotel.

Begin the 3rd day of your Jordan Petra Tour Package with a good breakfast at your hotel. After breakfast you will be picked up, and then you will head to Jerash, the remains of an ancient Roman city. On arrival, you will meet up with a local specialist guide who will give to a detailed tour of the site. With its beautiful colonnaded street, Oval Plaza the Nymphaeum and the Temple of Artemis , the site is considered to be the best example of ancient Roman architecture outside of Italy.

After Jerash, you then head to Ajloun Castle. This imposing fortress was built in 1184 AD by a general who was serving under Salah Al-Din.

When you are finished exploring the fort, you then visit Umm Qais to see the ruins of an ancient Greco-Roman city that was once known as Gadara. While here, you will also be able to enjoy spectacular views of the Sea of Galilee and the Golan Heights, and then you will be driven back to your hotel in Amman.

DAY 4 – Tour at the Lost City of Petra

Enjoy breakfast at your hotel and then you will make your way to Petra to see Jordan’s top tourist attraction, the Lost City of Petra. This magnificent rock-cut city was founded during the 6th-century BC by the Nabateans. After settling in the area, they set up a major trading hub, and set about carving their city out of the walls of a long and deep rock gorge. Visiting this site is without any the biggest highlight of our Jordan Petra tour packages.

On arrival at the site, you will meet up with a specialist English speaking guide, and then you will head from the visitor center to the Siq (canyon entrance) on horseback, and then you proceed on foot. Prepare to be left speechless as you make your way through the canyon, passing several magnificent monuments along the way.

Pass by the Street of Facades, the Royal Tombs, and Pharaoh’s Castle until finally you arrive at the Treasury. This is the most magnificent monument at the site, and the main highlight of any Petra tour.

After your tour, which lasts about two hours, you will then be driven back to your hotel in Amman for the last night of stay in Jordan.

NOTE: Your Petra tour involves quite a lot of walking, so wearing suitable footwear is highly recommended.

Enjoy a last breakfast at your hotel, and then at the appropriate time our tour representative will meet you. He will then assist you with check-out, and then he will transfer you to the airport in time for you to catch your flight back home.

Not Included in Your Jordan Petra Tour Package

Prices for our Jordan Petra Tour Package are quoted per person in US$ and are valid until the 30th of September 2022, except during the Easter, Christmas and New Year holidays. Discounted rates for children. Contact us for an exact price quote.
Get Exact Price Quote